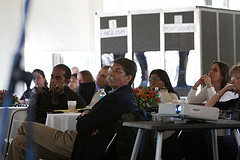 Conference attendees on November 5, 2009. The conference was being translated from a booth in the back of the room. (Photo by Jason Smith) 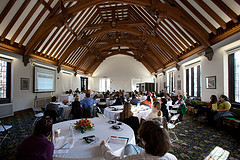 The conference was held in Swift Hall. (Photo by Jason Smith) 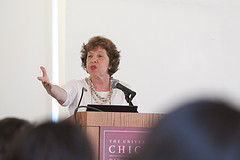 Mary Allegretti speaks at the "Social Movements and Chico Mendes Legacy for the Sustainable Development of the Amazon" panel. Photo by Jason Smith) 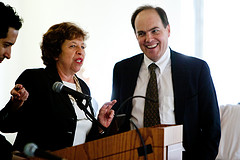 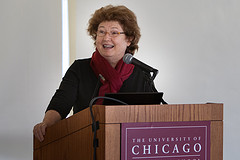 Manuela da Cunha served as respondent for the panel on "Science and Technology as a Basis for a New Development Model for the Amazon." (Photo by Jason Smith)

Brazilian Environmental Policies for the Amazon:
Lessons from the last 20 years

In the last twenty years, Brazilian public policies on the environment, in the Amazon region, have been characterized by evident inconsistencies. On one hand, the government has launched a series of environmental initiatives, including the establishment of conservation units, the combat of illegal deforestation, and the demand for Studies on Environmental Impact for procurement. On the other hand, development plans in this period, including the current “Programa de Aceleração do Crescimento (PAC),” Growth Acceleration Program, show an extensive list of infrastructure construction projects. Many of the projects for the Amazon would have severe social and environmental side effects. Shifts in the use of land in the Amazon produce globally significant emissions of greenhouse gases, such as carbon dioxide, methane, and nitrous oxide. A reduction of the rate of deforestation represents an avoided impact. The avoided deforestation is a means to transform the value of environmental services in the forest into a monetary flux that may be used to maintain the forest and the human population that defends it. Avoiding the emission of greenhouse gases represents the environmental service that is closest to becoming a meaningful source of income in the Amazon. At the same time, biodiversity and water cycling are, potentially, sources of value in the long run.

Philip Martin Fearnside is a researcher at the Steering Department for Ecological Research at the Instituto Nacional de Pesquisas da Amazônia (INPA), in Manaus, since 1978. He has been studying environmental problems in the Brazilian Amazon for 33 years. Professor Fearnside holds a Bachelor’s degree in Biology, from Colorado College, a Master’s degree in Zoology, and a Ph.D. in Biological Sciences from the University of Michigan. He is the author of more than 400 publications about the environment and development. He was identified by the “Instituto of Scientific Information,” (Thomson — ISI), as the second most-cited scientist in the world, in the area of global warming. In 2006, the Brazilian Ministry of Environment awarded Professor Fearnside first prize in the Chico Mendes award in the area of Science and Technology.